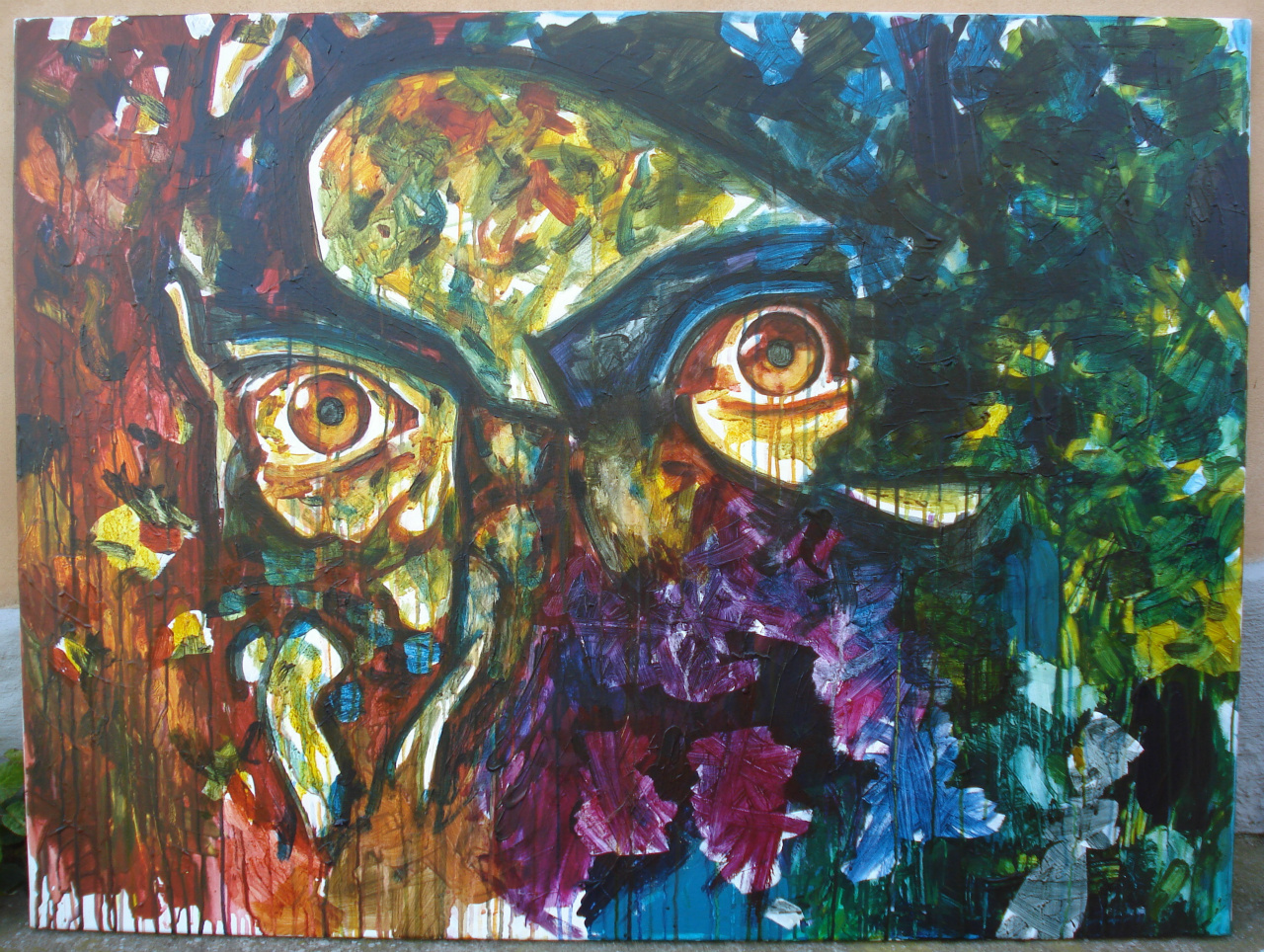 Talented artist Josua Justesen paints both abstract and super-naturalistic acrylic paintings, always on blank canvasses. I was asked to design for him a website and visual identity that didn't take focus away from this paintings. 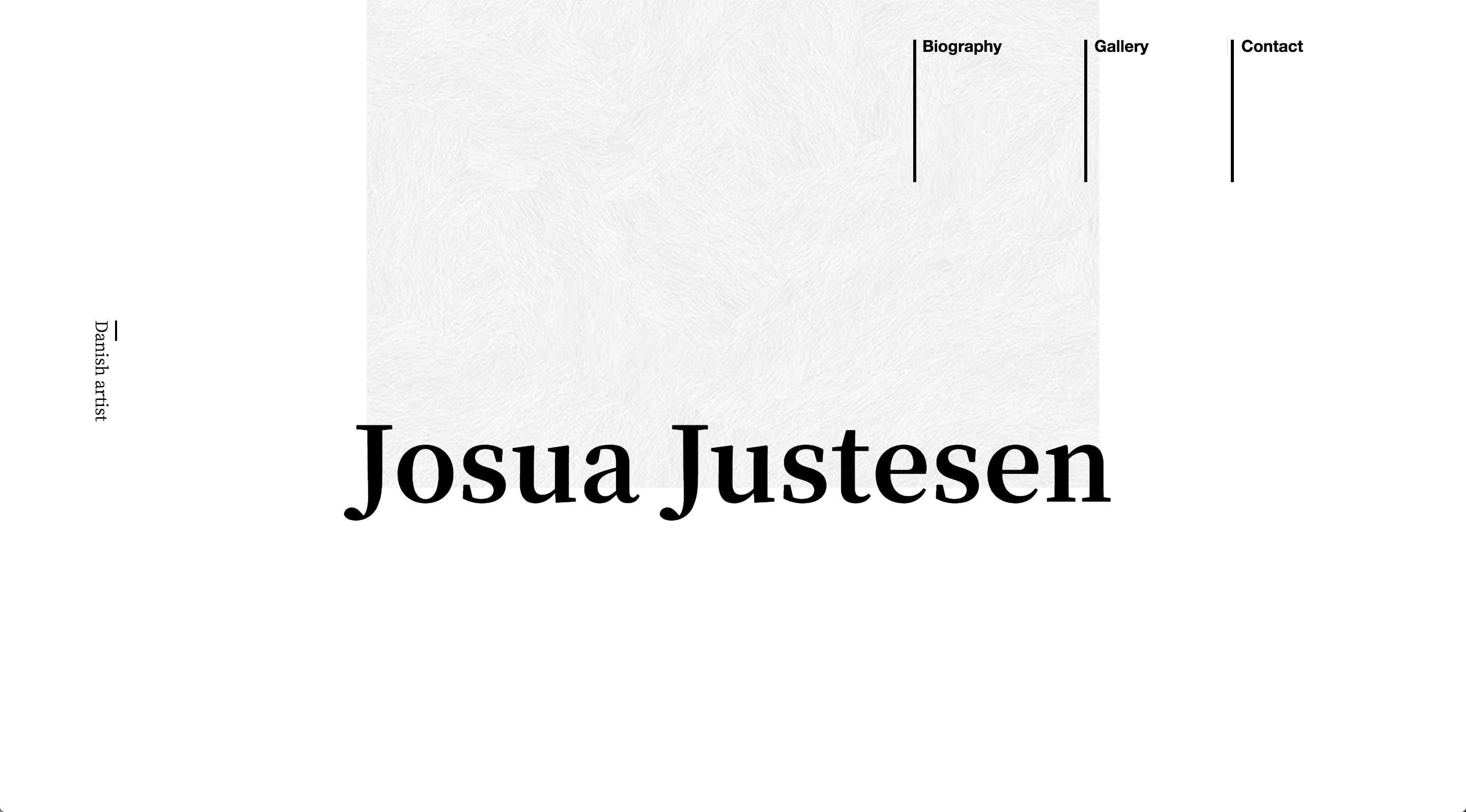 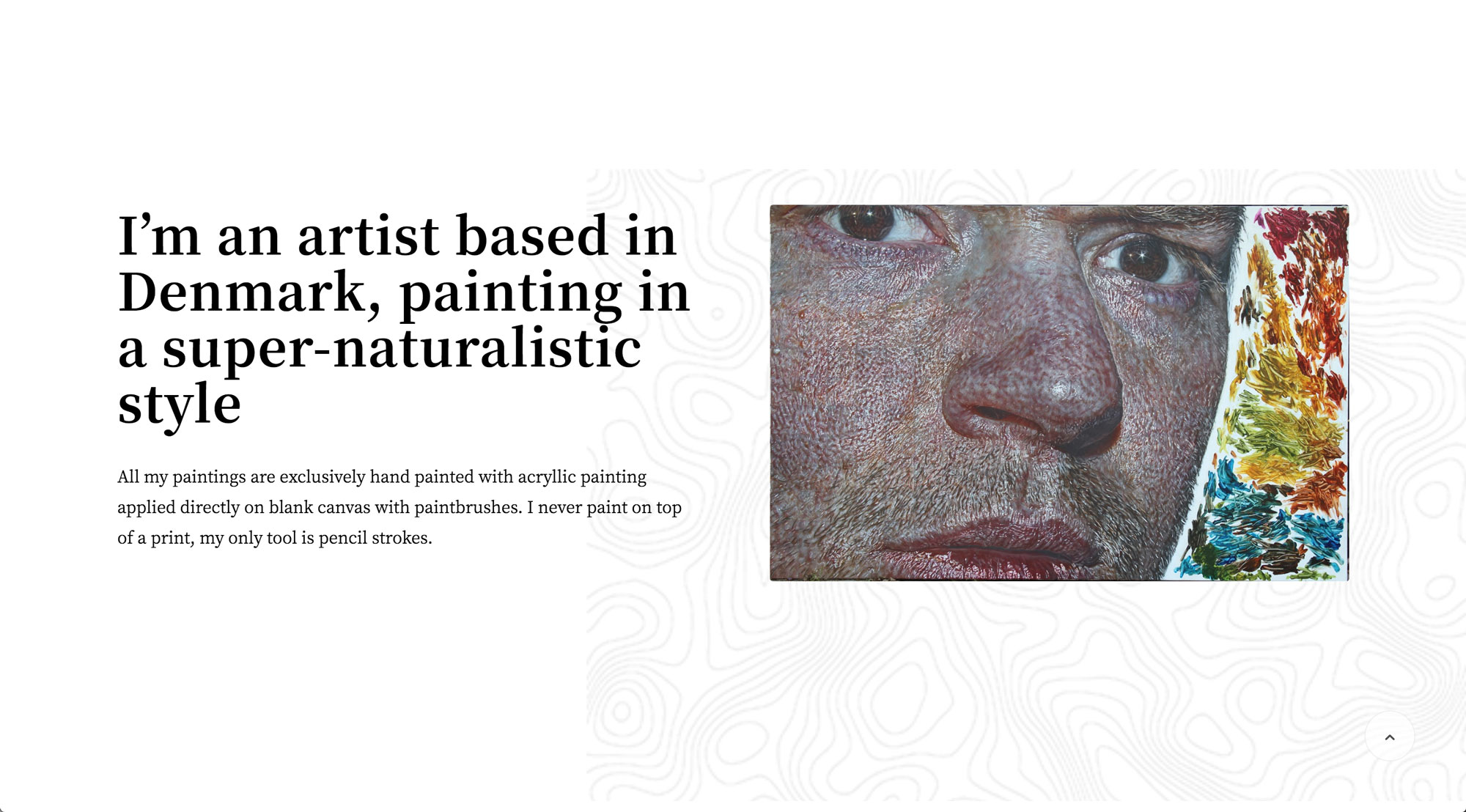 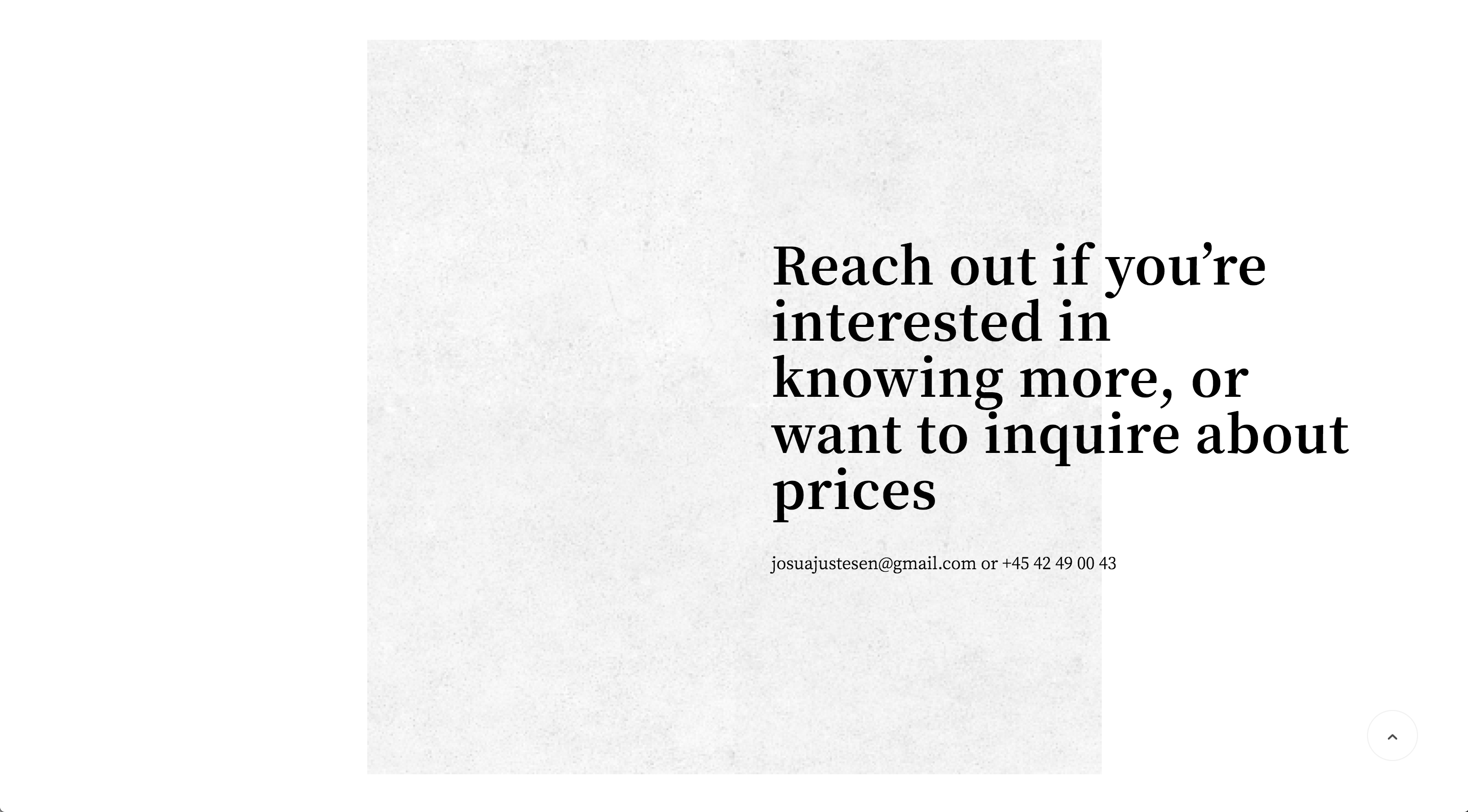 Example visuals from the project

A crisp, clean, almost sterile design with only concrete and topographic textures as a subtle background to the colourful artistic paintings. Josua's colorful painting scream in this environment.

PROBLEM | Create a visual identity for artist Josua Justesen and develop the website. The artwork should be in the absolute center of attention.

CONTEXT | For this project I was very much set free, free to design any kind of identity based on my thoughts of the artists and his needs for approaching galleries and potential customers. There was no deadline for the project either. Artists tend to lack marketing skills (and interest) which was also the case for Josua. This left me a as a designer to try and understand the art industry and the play between galleries, artists and customers. What do each seek in an artist's website? Clearly the answer was to be found in promoting the artwork visually, but there is just as much to be gained in subtleties and prominent headlines.

BLACK ON WHITE | Stereotypical, perhaps, but art goes hand in hand with a monochrome look. Researching on the look of galleries, white is the one common denominator, always the backdrop of everything from romantic to post-modern art. I wanted Josua’s paintings to have the same setting and resemble the art galleries in which he wants to display, using this exact website.

FONT FACE | My starting point was the typography Noto Serif, which had the right balance of artistic feeling to it. I wanted big, bold headlines with smaller paragraphs of text. 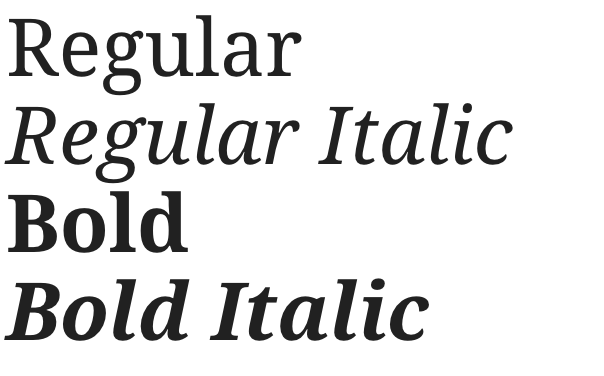 CONCRETE, BRUSHES AND TOPOGRAPHY | To mix things up a bit subtle light gray textures feature behind the other page elements. They add to the atmosphere of being in a gallery. Without taking focus away from the paintings, which, after all are the attractions of the website. The site shouldn’t point too much to itself. 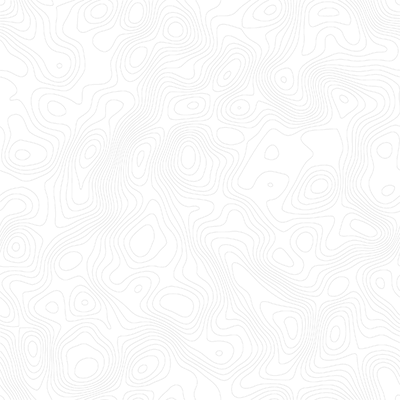 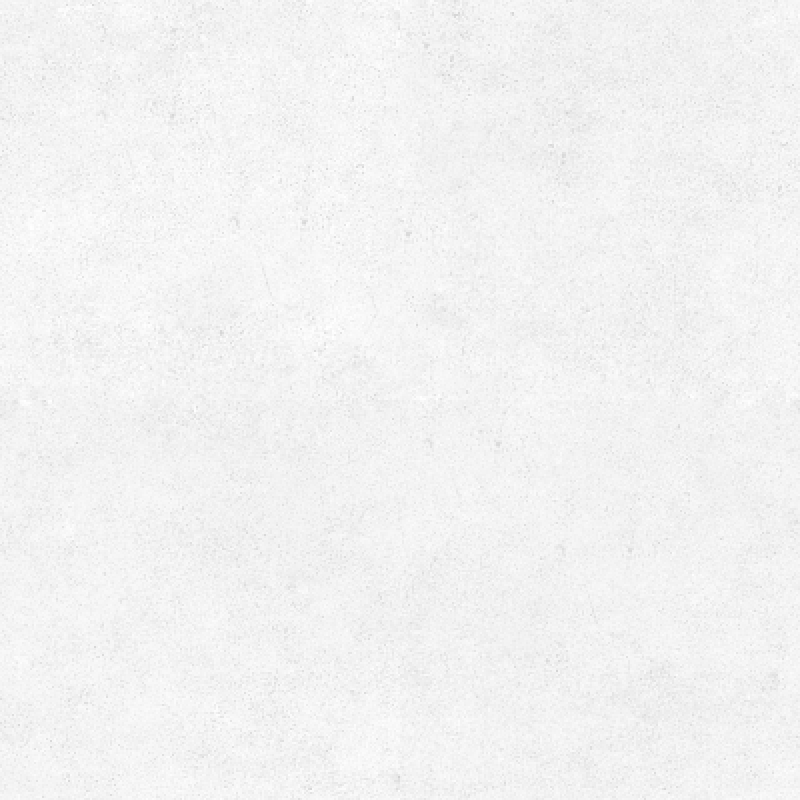 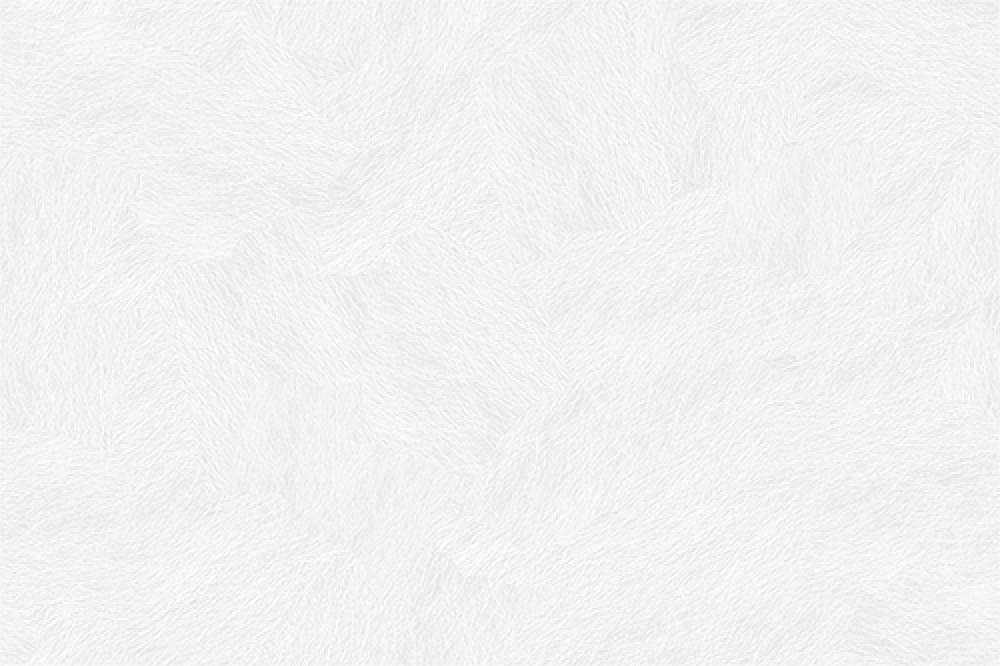 OFFSET TEXT | The layouts become more dynamic by the textures being placed off-grid, sometimes with a parallax effect to give attention to the disjoint between the elements. The eye still follows the paintings, but interest is sparked from the offset movement. It's again subtle enough not to take attention from the content, but a simple trick to add flair to a minimalistic site where the user is not in a hurry.

Simple as it should be | TIn my research I found that many art sites play almost arrogantly with simplicity. Regular black text on white canvas. Similarly I chose to emphasise the artwork piece's names even though I was painfully aware that they were all untitled. The repeating 'Untitled' in a simple black font adds some street flavour to provoke the simple setup. 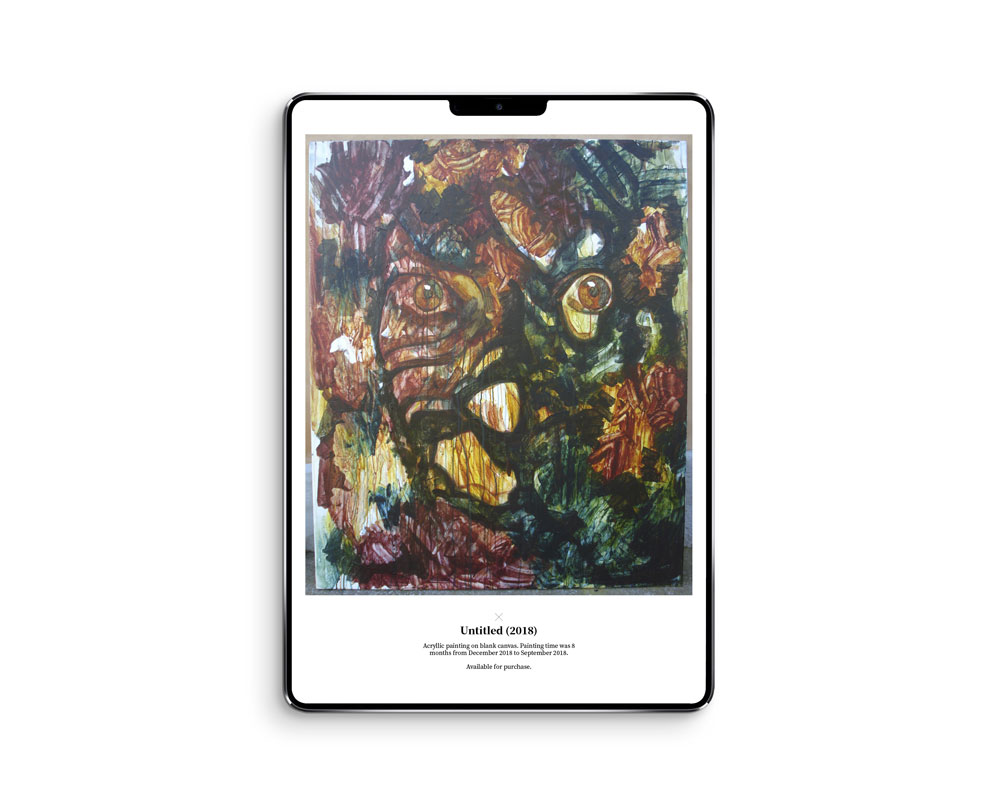 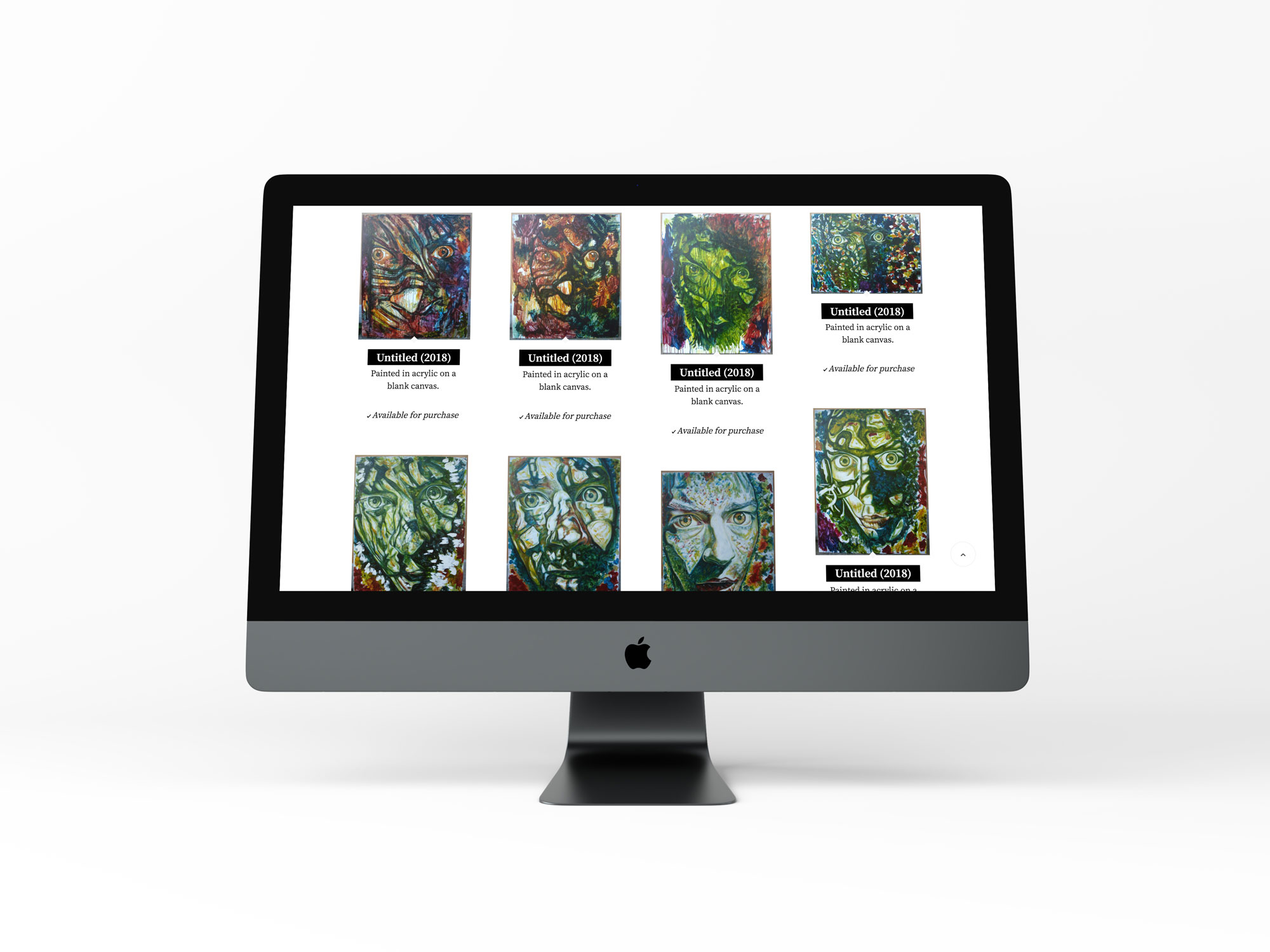 ADDING ANIMATIONS | To match the vertical text on the landing page, I came up with animated vertical lines in the main menu, extending on load and on hover. The animations were similarly a subtle touch of life to a sterile site.

TRANSLATING THE WEBSITE TO A BUSINESS CARD | A minimalistic business card continues the style of the website, with a black 'Noto Serif' and a subtle offset texture. I advised the artist to print it on high quality paper, so the large amount of whitespace felt luxurious and had a tactility similar to the serenity of starting to paint on a blank canvas 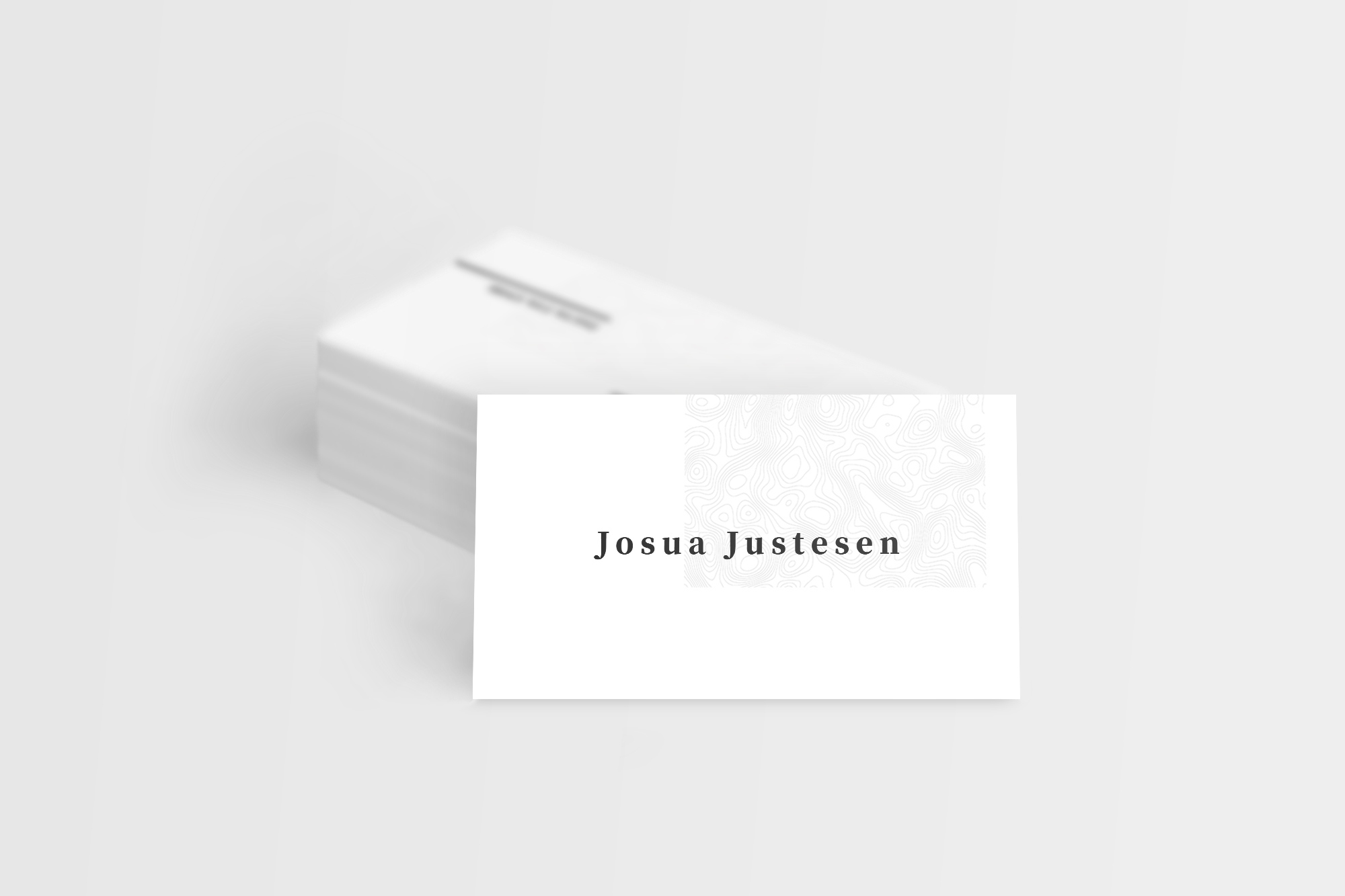 LINE ANIMATIONS | The project’s red thread in terms of animations became a solid black line, extending in length upon load and hover. I landed on a 200ms cubic-bezier curve, which I’ll definitely reuse in other projects. Josua and I agreed that the animations stroke a good balance of subtle versus interesting, which is why they were kept as a main design element.

OFFSET TEXTURES ON ALL DEVICES | Scaling down the offset layouts to match all screen sizes was an impossible task, but also a redundant one. The offsets can easily be different and still look good on mobile and portrait tablet mode. Translating this website into being responsive therefore meant breaking up the initial design and accepting that parallax is still not a thing on mobile.