The making of an art book slash magazine

Supported by hundreds of backers on Kickstarter, we set out to create an art book that didn’t just let creatives go behind the scenes on one project, but 13 high quality films, comic books and short films, 5 of them Academy Award nominated. 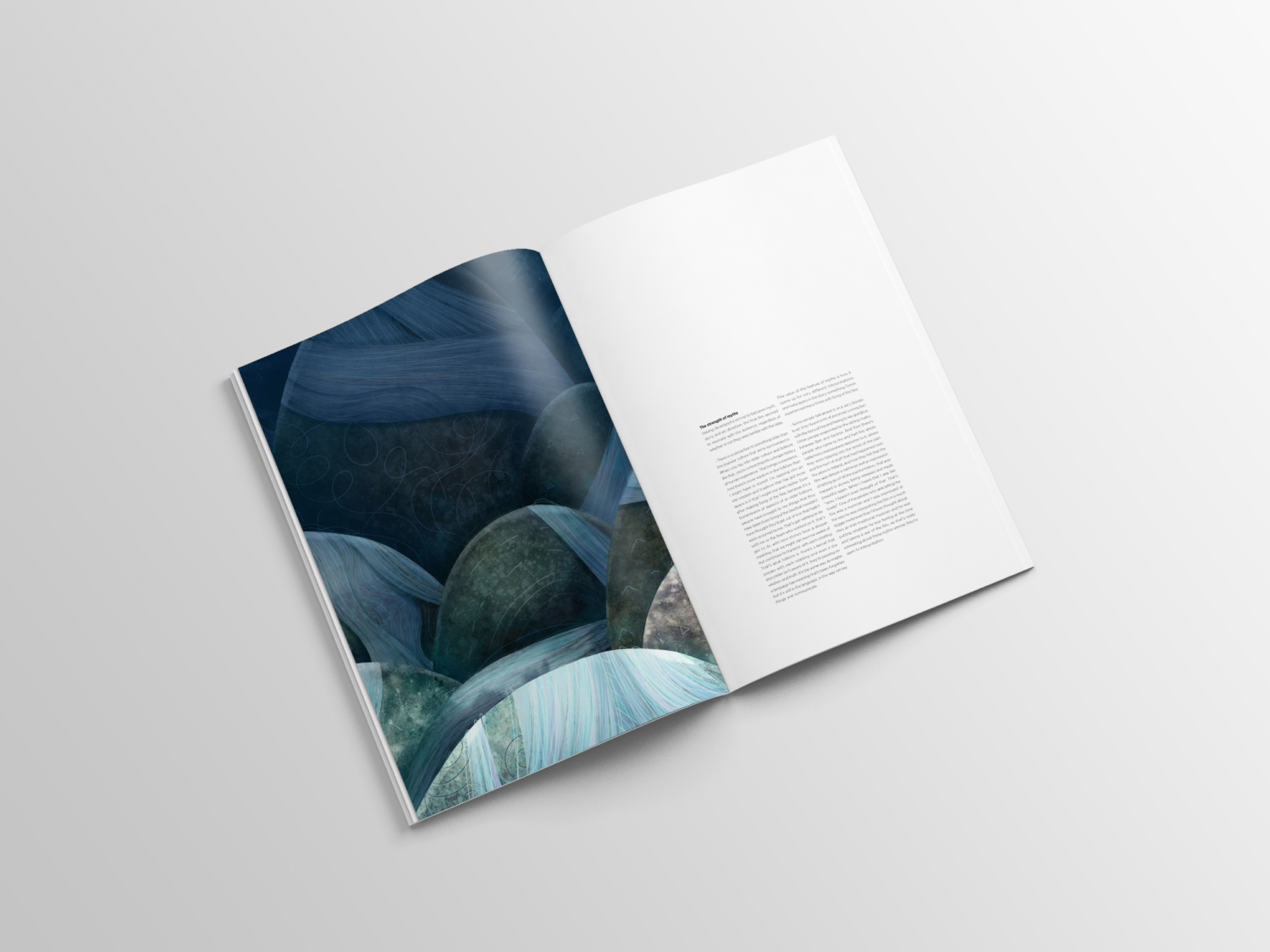 Example visuals from the extensive project

The art book required 176 pages of unique layouts, giving space for each project’s characteristics to come forward and the stories to unfold. With artwork bleeding the margins and spreads and and otherwise minimalistic design, the art book has gotten very positive reviews from both Kickstarter backers and customers around the world.

I was the leader of the project and the only designer on the project. I edited more than half of the interviews and translated them into 12 page articles. I created the concept and visuals for the Kickstarter campaign and all following sales material.

Problem | Create an art book goes in-depth in the creative process of film makers, while also serving as a beautiful coffee table book. As pretty as it is nerdy.

Context | My team and I had created and run the digital art platform Itsoncraft.com for almost three years. In this process we had collaborated with dozens of great film projects and showcase their process artwork online. Many asked for a book version, and we knew the art would display beautifully on print. To acquire the funds for the project we ran a Kickstarter and got 332% funded and 12 projects onboard to feature in the book. 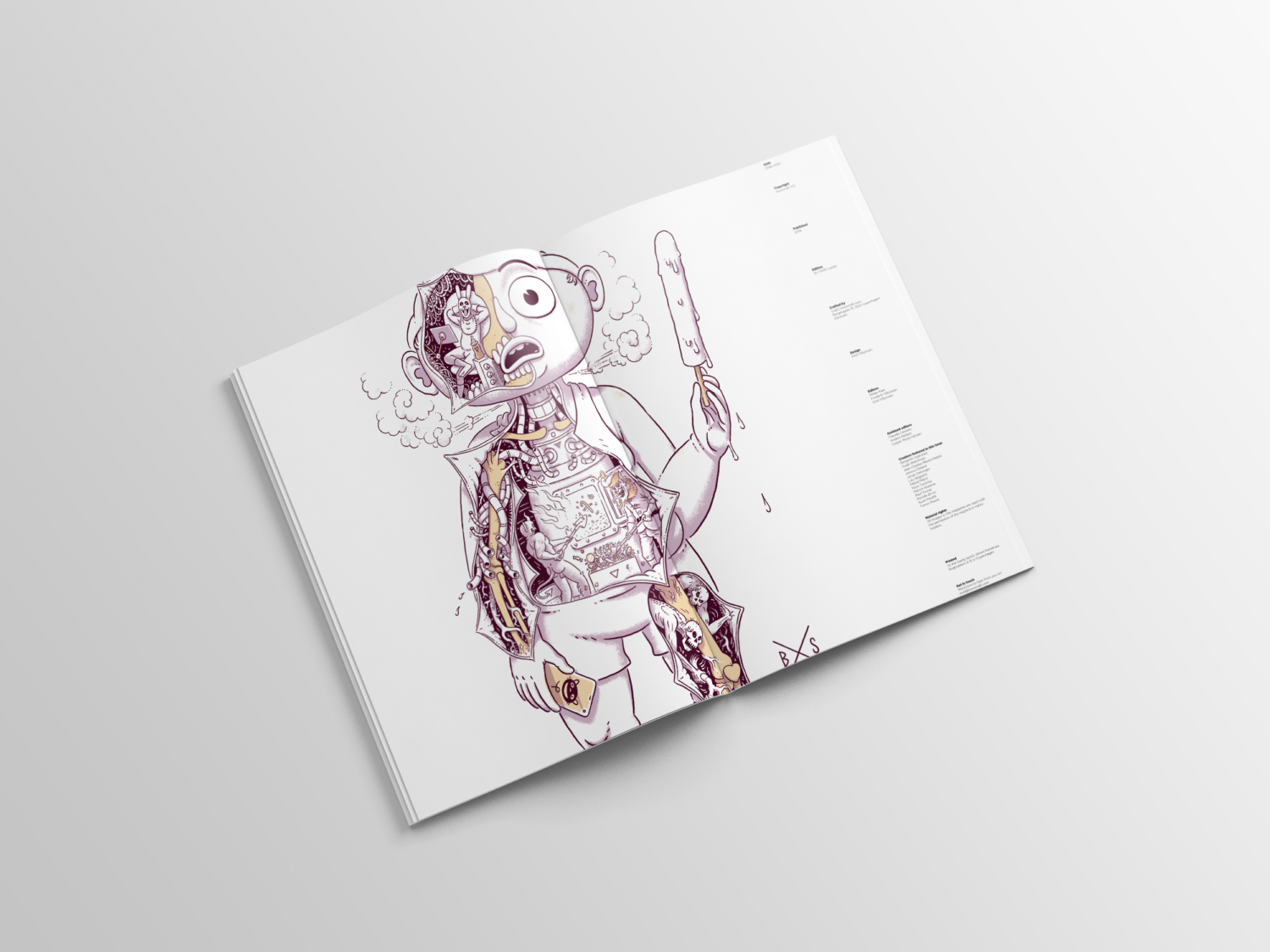 FRONT AND BACK COVER | The first thing I designed was the front and back cover, trying to set the tone of the project. We had a declared goal of striking a balance between magazine and book; this raised questions like whether or not “Episode 1” and the chapter headlines should be displayed and how prominently. Another crucial point was how the book featured 12 projects, but fitting one image from every project would look crowded. In contrast, highlighting just one wouldn’t communicate the diversity of the book.

The solution ended up being choosing artwork that played well together in 5 horisontal bars. This allows for future issues that both showcase the projects featured in the book and are clearly different from the previous issue. The downside was that some projects were “left out” on the cover, but that didn’t prove an issue.

FORMAT | Researching on similar products, we piled up on lists of digital copies of coffee table books, art book Kickstarter projects and physical magazines and books. We decided on the larger-than-A4 format, offset printed quality and uncoated paper. 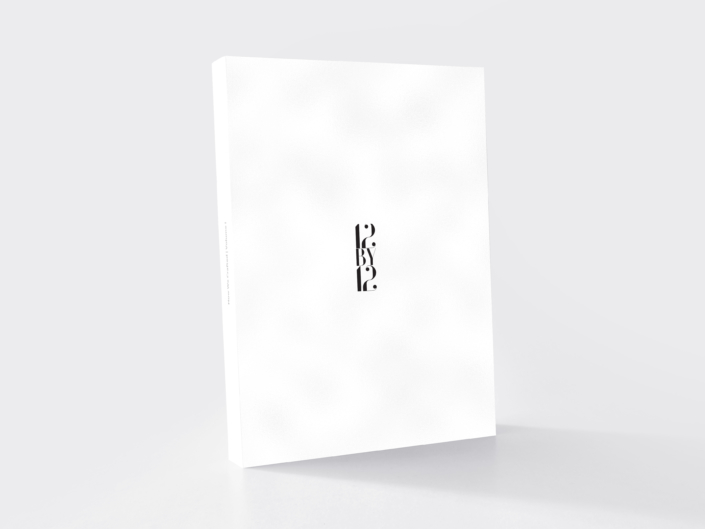 Process | Playing around with a white minimalistic look 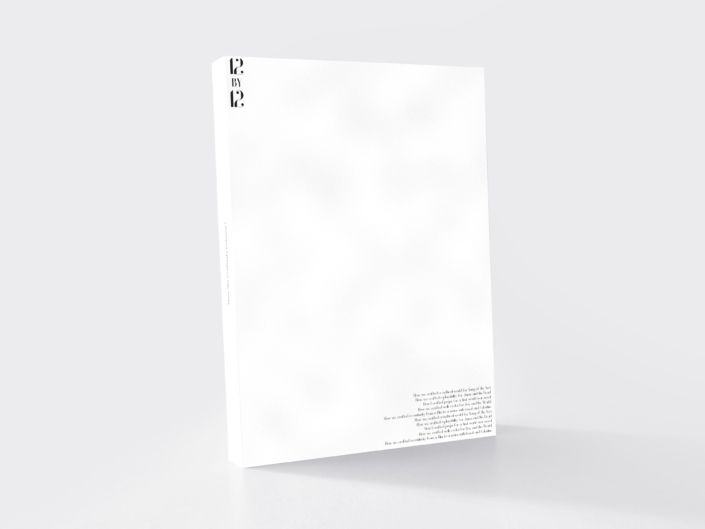 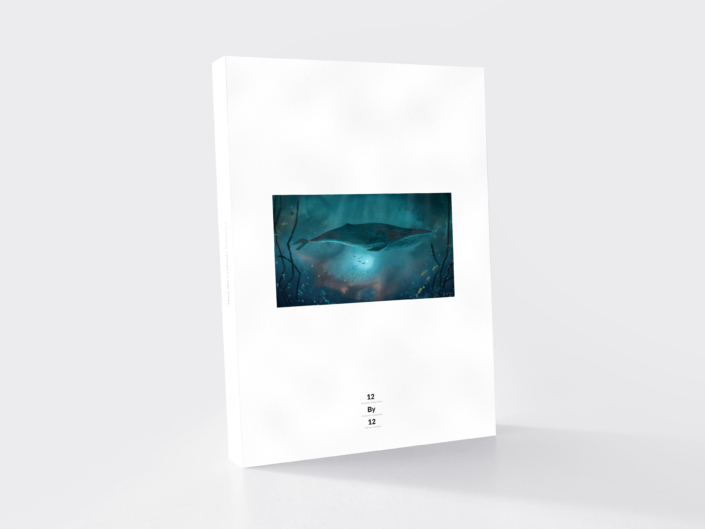 Process | A test with one image with lots of whitespace 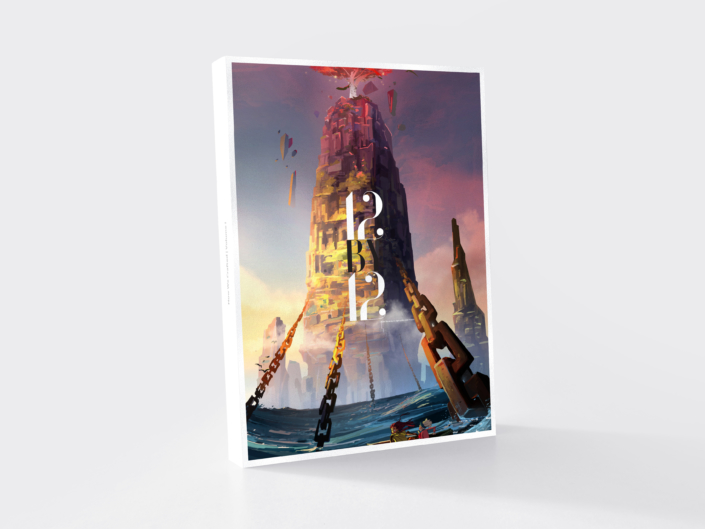 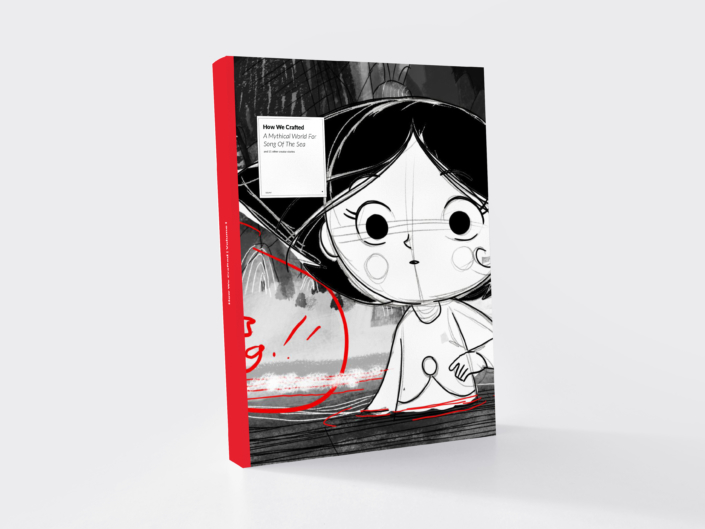 Process | A mockup that emphasised "process" more than final artwork, indicating you could learn something from this book 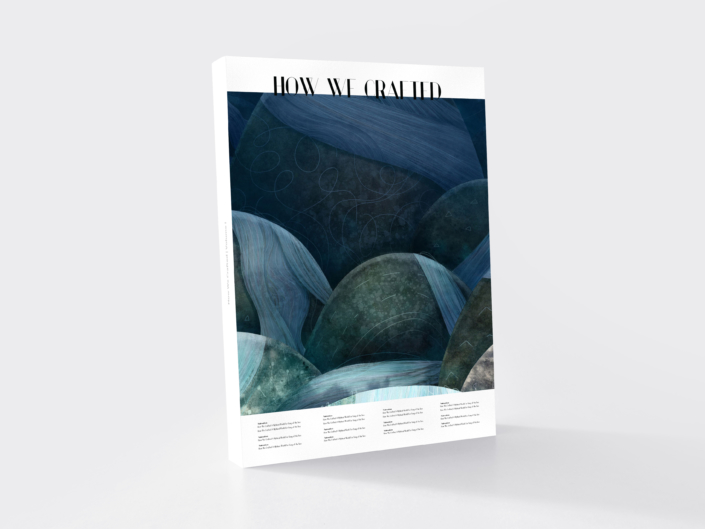 Process | A test that led to the final cover; an offset title and a list of projects in the bottom section 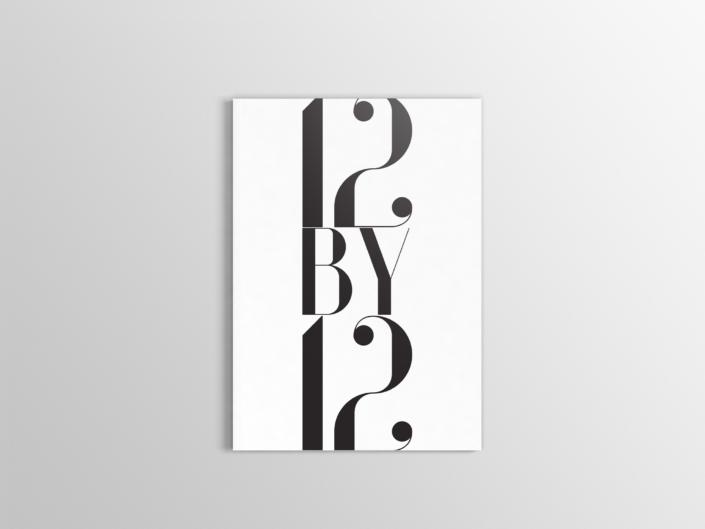 Final | Back cover of the art book. A fashion-inspired font 'Vanity' is used to balance the artwork heavy front cover 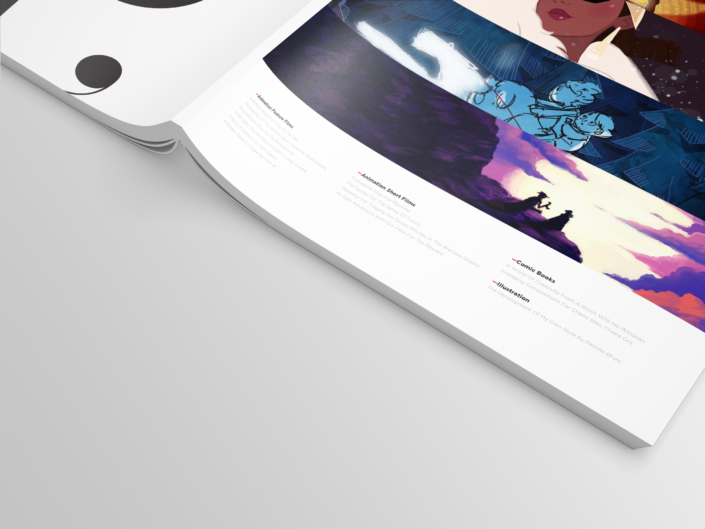 Final | Most art books are very saturated and dense in the look. To make it stand out, I keep a white clean palette 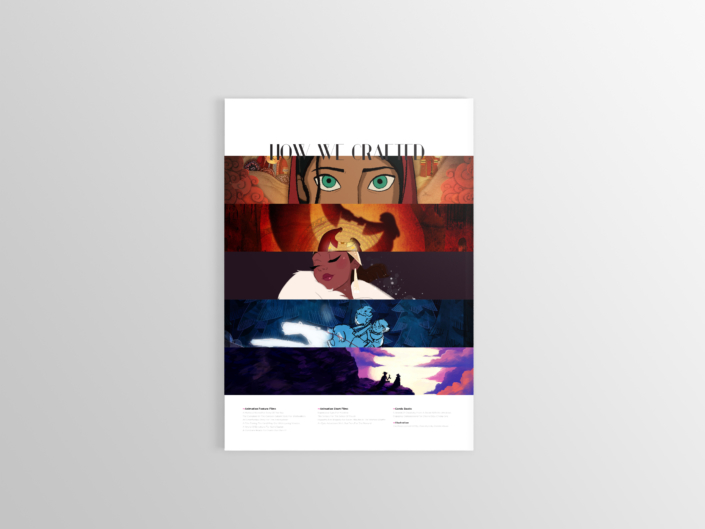 Final | The cover of the art book. From testing endless combinations of artwork pieces, we settled on a red-to-purple color transition. The title is slightly offset to give it a more tongue-in-cheek look

FINDING THE STYLE OF CONTENT | Settling on a cover with the interplay of the fonts ‘Gotham’ and ‘Vanity’ and lots of whitespace, was a great stepping stone for continuing. The first step was to make a basic paragraphs and headers. I used the Introduction chapter and index as a playground for this. 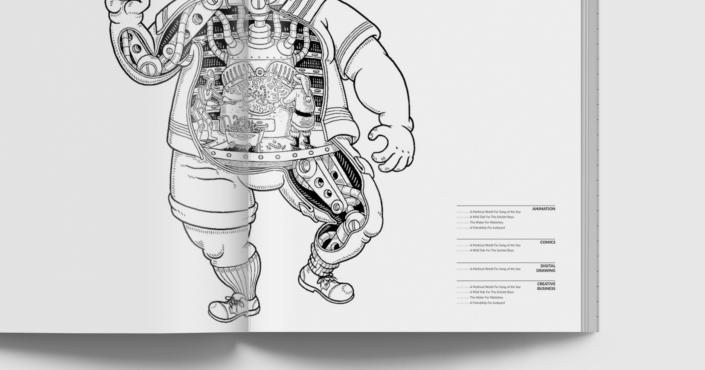 Process | Index text that came out clean and stylish, but too simplistic in relation to the final design that catered more to the audience's typical art book taste 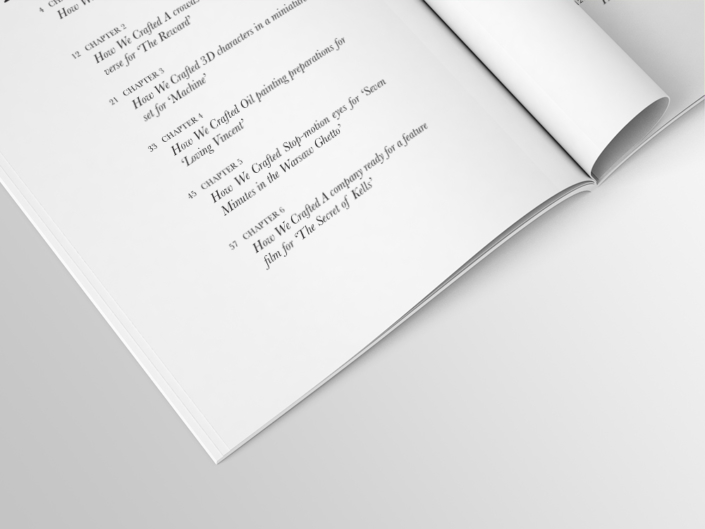 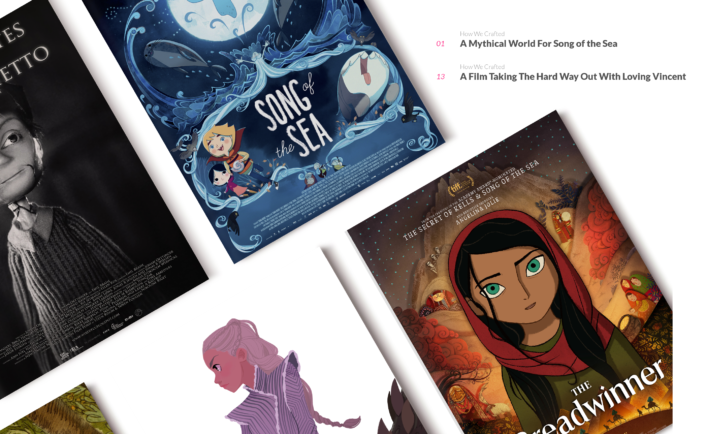 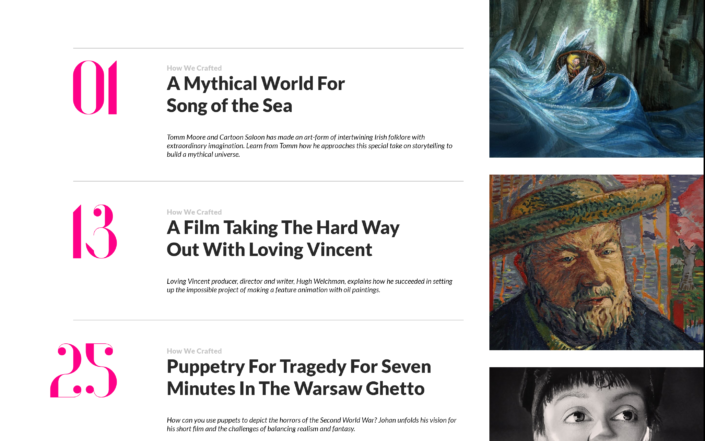 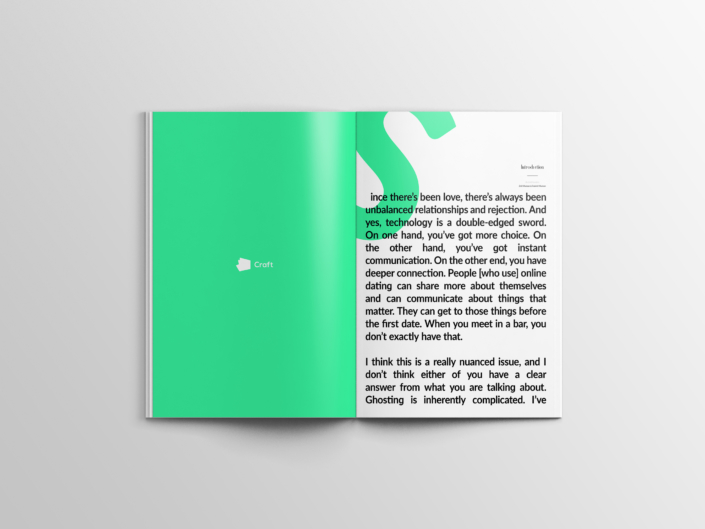 Process | Introduction test. The style from the index didn't match this and we decided it was too fresh 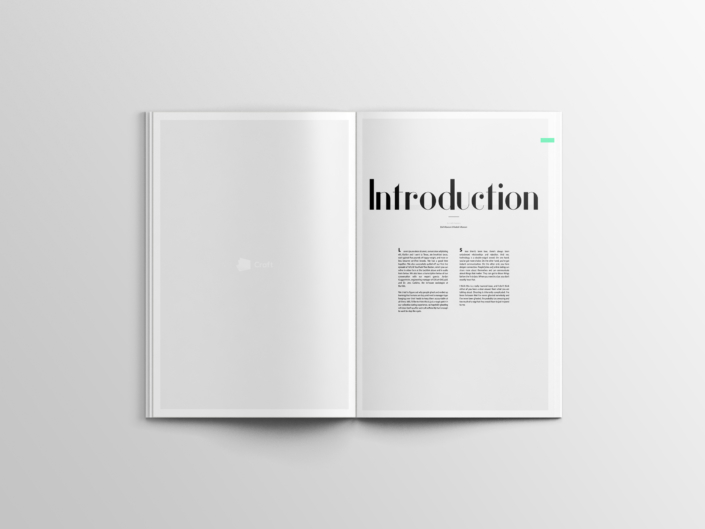 Process | Introduction test. Another attempt at a blank left logo page, this time with a more stylish look. 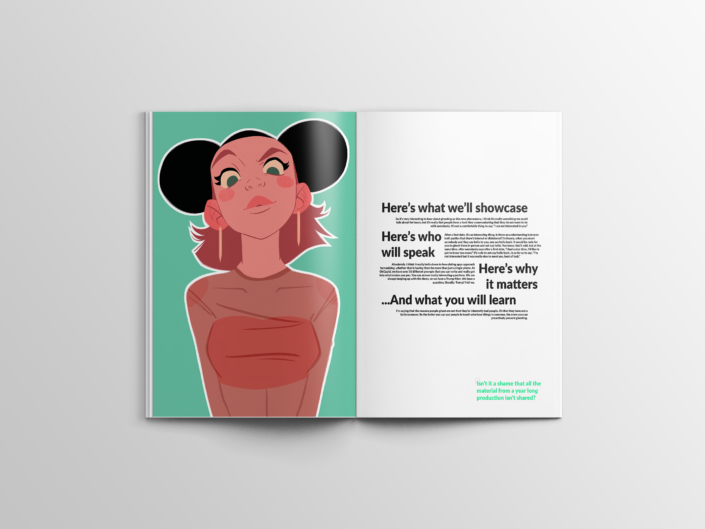 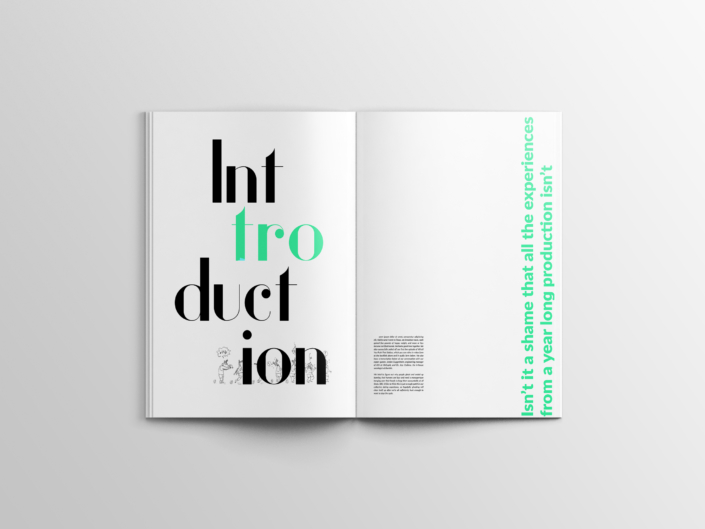 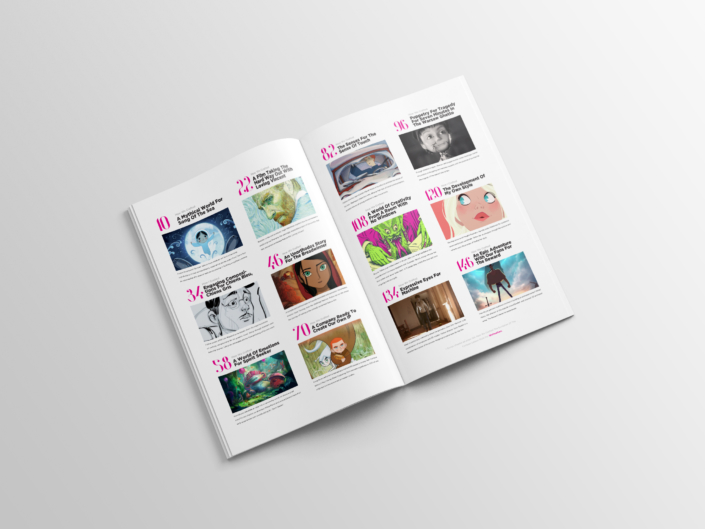 Final | While a minimalistic index is cool, I decided that it'd be important for first time readers and browsers in the stores to quickly glance at the different projects and how they look. A simple line of text wouldn't fulfil that need

PARAGRAPHS | After testing various combinations of fonts, line heights and columns, I narrowed it down to three versions of a two column grid. In order to test the best solution, we had 25 pages printed in the correct sizes but in digital print. We wrapped the pages in a physical mockup of the correct size of the book and tried to read the pages from realistic distances and in various lighting. From this, I decided on Gotham Book light with bold headings.

DROP CAPS | To keep a consistent style, I wanted to include the pink contrast color somewhere. Playing around with drop caps, I found it to be too dominant; the artwork should be in focus, not the book’s style. The solution was to start every quote with an em dash, as a subtle contrasting element.

LAYOUTS | I quickly established that I wanted a wide margin but that the artwork should bleed to the edges. This was the foundation that every spread was laid on, tweaking and twisting it from this. 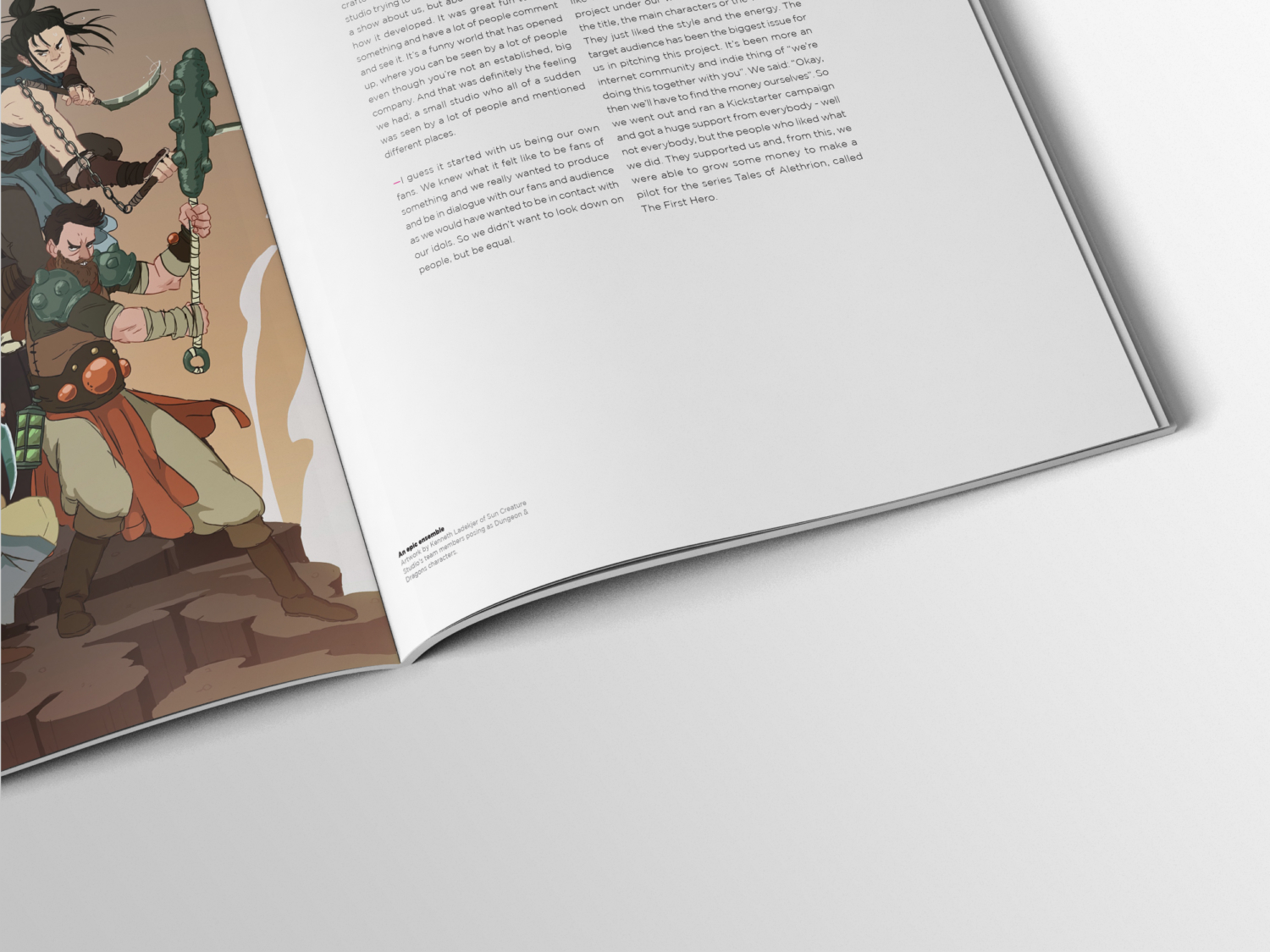 PRESENTING IT WELL | In the process of making the book, we needed to convince hundreds of people that the project was worth backing on Kickstarter. For this purpose realistic mockups in Photoshop came in handy. Browsing through a lot of options, I found it important to reflect the format of the final book both in terms of height, width and depth. This proved impossible though, forcing us to explain it with words.

As soon as the book was printed, I decided to photograph it to give an impression of its final look. The setup was spontaneous but proved useful for the selling of the book. 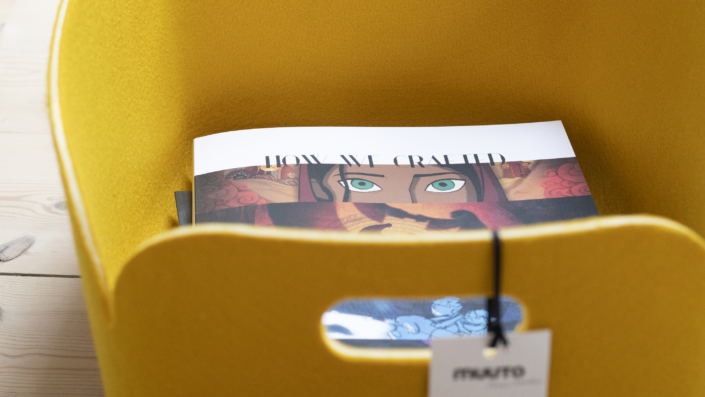 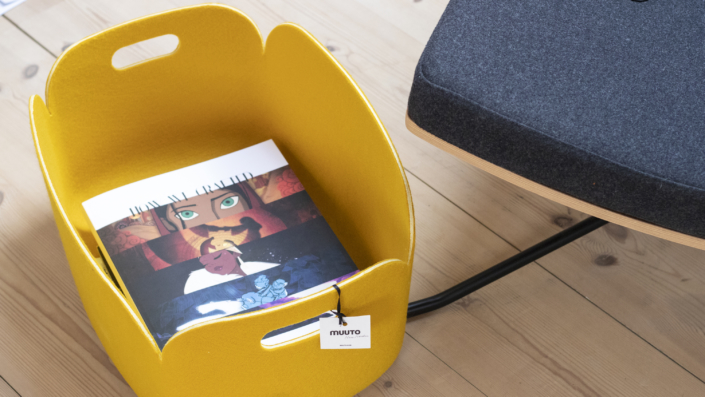 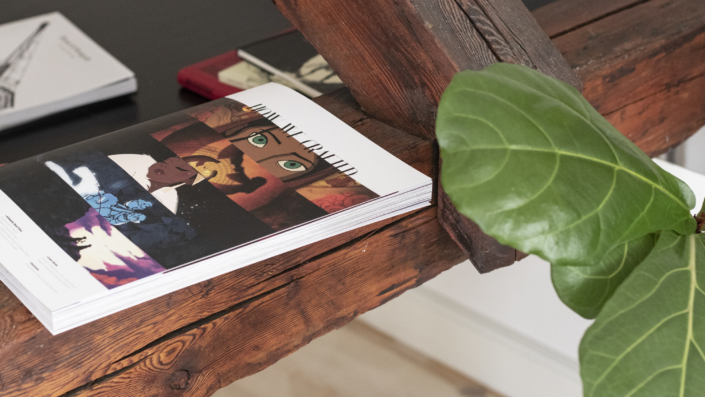 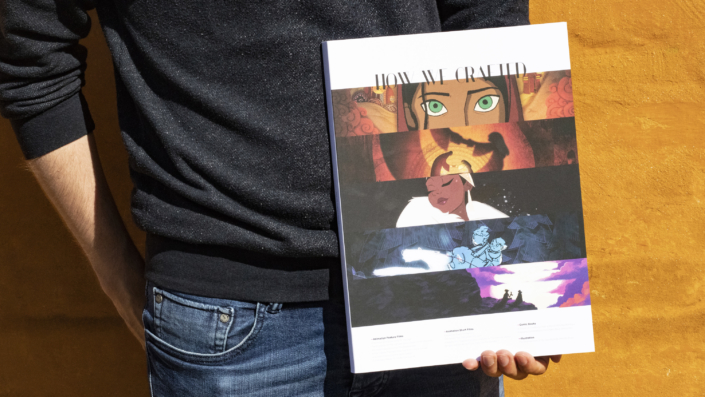 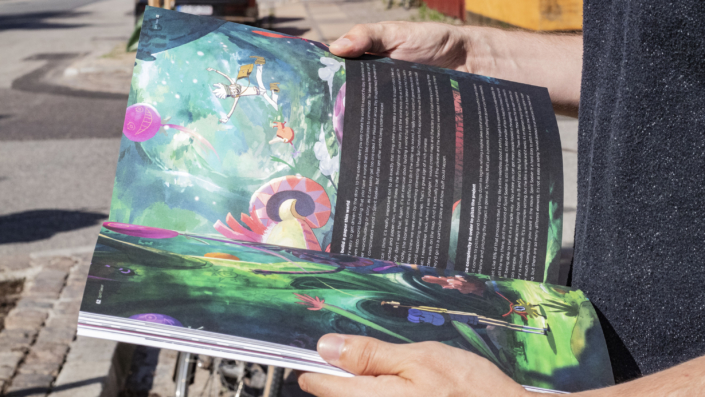 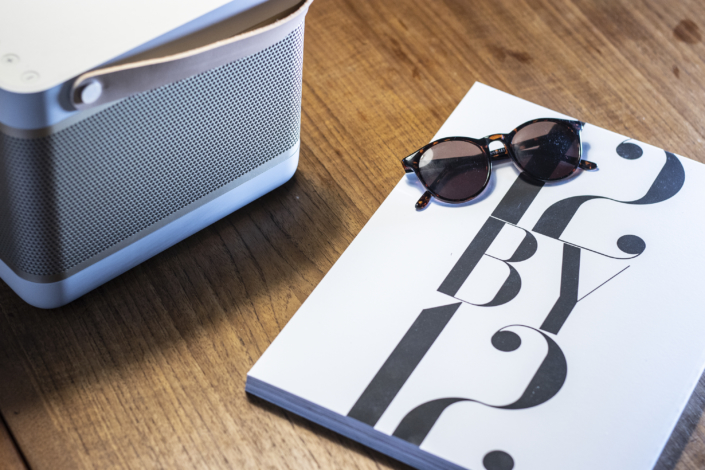 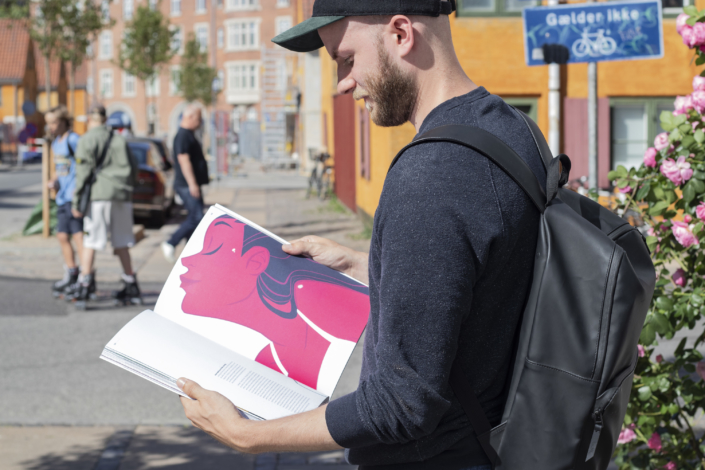 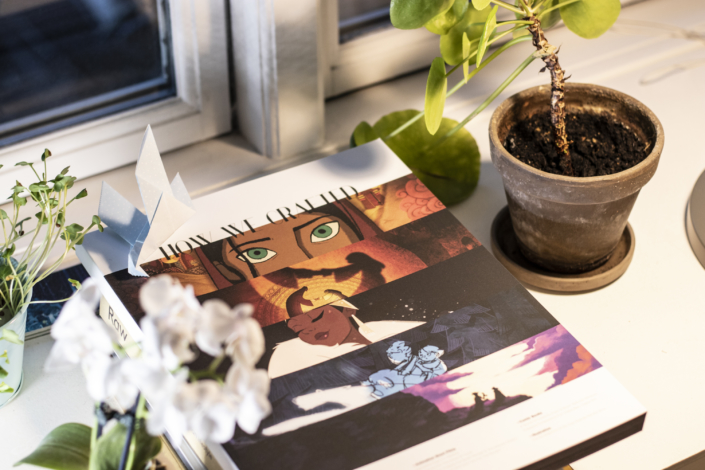 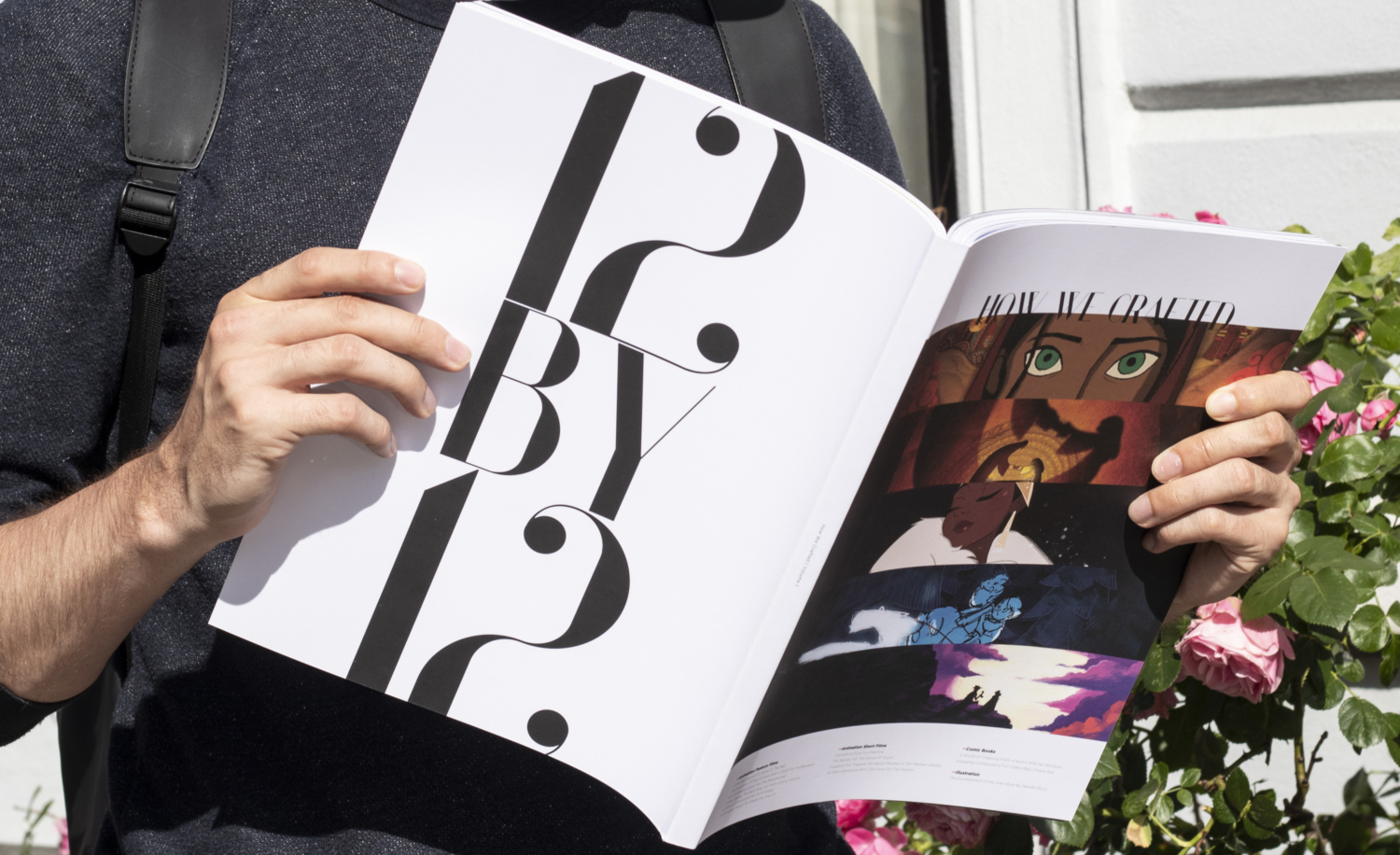 FIRST BOOK DESIGN | This project was my first book designing job, and I’m thrilled by how it turned out. Several festival attendees stopped us in the street to ask who layouted the book. That must be a good sign.

INDESIGN | I worked daily in InDesign for three months straight, which taught me a lot of ways in terms of scaling a project of this size. It’s no mean feat to manage 10+ heading styles, color palettes, thousands of words and different versions. I made us of InDesigns book feature which saves a lot of headaches.

PRINTING IT PAYS OFF | When designing for print, you should force yourself to print as much as possible. It’s simply very different from seeing it on screen and you owe it to your readers to have tested it in a real life scenario as early on as possible.

Yes, It's live in the hand of users.